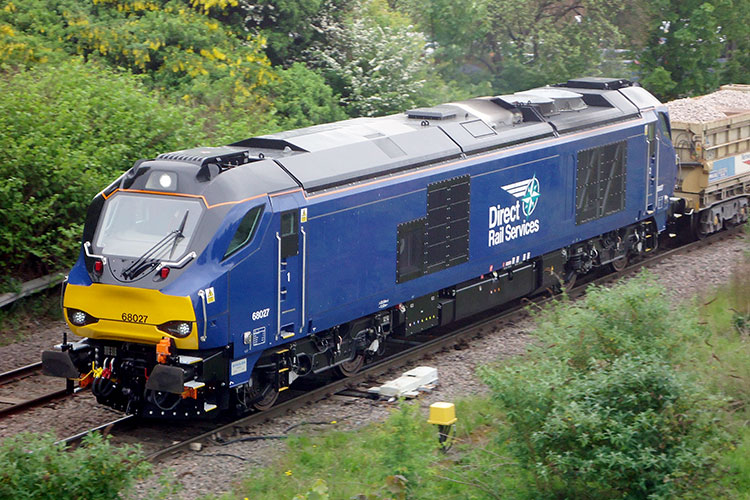 Recently delivered DRS 68027 sports a basic but temporary DRS livery in anticipation of receiving the Transpennine Express livery. Here it is seen passing Nottingham-Stapleford on 15 May 2017. Picture by John Whittingham.


In an interview with Rail Technology Magazine, Robin Davis, head of new feet at Transpennine Express (TPE), gave an update about the status of the new fleet for the operator. Amongst other topics, also the Class 68 locomotives were discussed, which are to be provided by Direct Rail Services (DRS) for use with CAF Mark 5A push-pull sets. Both the Class 68s and the coaches are owned by Beacon Rail Leasing.


It is stated that the first Class 68 would become available to TPE in late-May. When available, the loco would be modified to enable them to operate in push-pull mode with the CAF coaches. The modifications will be performed by Stadler at the DRS workshop in Crewe. In June, a second locomotive will follow and when the modifications to both locos are complete, they will be sent to the VUZ Velim test centre in the Czech Republic for dynamic trials with the first Mark 5A push-pull set. The coaches are expected to be complete in the third quarter of 2017.


Structurally, 14 locomotives will be in use by TPE. In an article in Rail (UK) from 8 October 2016, it is mentioned that a total of 19 locomotives will be made available for TPE services, indicating that 5 locos will be used as 'spares'. A first entry into service is expected to take place in the summer of 2018.