Eberspaecher will become the preferred exhaust technology partner for Bombardier’s new Traxx multi-engine platform. The cooperation agreement between Bombardier Transportation and the Esslingen based company covers the development and production of exhaust systems for up to 200 Traxx multi-engine locomotives.


The complete press statement includes a new rendering of the multi engine Traxx. In 2012 Bombardier will start first trials with this new multi-engine concept. Delivery of the first unit is expected for 2013.

Related sections:
TRAXX DE ME: Deutsche Bahn
2011-11-21 - [IL] Israel Railways 1401 and 1402 have arrived in Haifa
On 02.11.2011, the first two Euro4000 diesel-electric locomotives for the Israelian railways arrived in their new home country. The image shows both units while unloading and their stay at Haifa depot the next day. - CM 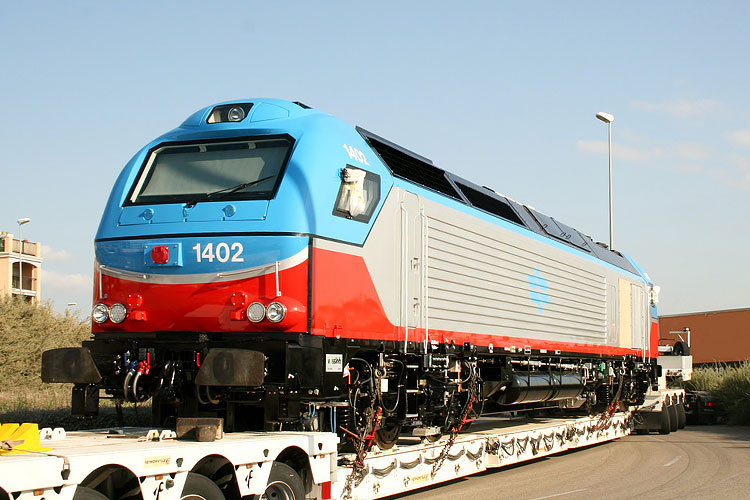 In the mean while, the second EuroRunner for IntEgro, has been restyled. The basic white livery is gone and replaced by the blue and green. Unlike IntEgro 223 144, the new locomotive has a blue frame. - DdP
Related sections:
ER 20: IntEgro
2011-07-12 - [SL] Four narrow-gauge GT26 locos for Sierra Leone

African Minerals has ordered four GT26 locomotives from NREC, which are to be produced by TZV Gredelj. The locos will be shipped from the port of Rijeka to Sierra Leone. The deal concerns four 2.25MW strong diesels, which will mainly be used for the transport of iron ore.

Last week we brought some news about the Europorte 4006. Its sister, the 4005 is now also part of the Europorte fleet. Maybe you remember it a DE 39 in test-service of the HGK in Germany. Some images from the 4005, without large service numbers, in St. Jory Triage near Toulouse. - TL
Related sections:
EURO 4000: Europorte
2011-06-27 - [SI] EuroRunner for Adria Transport

Three impressions of former Siemens demonstrator ER 20-2007. Since 12.05.2011 it is property of Siemens' Prüfcenter in Wegberg-Wildenrath. It has been in service for Siemens a demonstration and evaluation vehicle for exactly four years. - KAR
Related sections:
ER 20: ER20 2007 / PCW 7
2011-05-22 - [AT] dynamic trials with the Vectron DE

During the past week, first dynamic trials have been completed with the Vectron DE. RTS Austria is responsible for the traction of the test-train, that visited the Westbahn and the line between Innsbruck and Ötztal Bahnhof. New is the Interfleet sticker on the side of the DE.

During the past week, Czech operator Metrans has executed several trial runs on foreign ground with their new EuroRunners. On 08.05.2011, Metrans 761 001 and 002 arrived with a container train at Dunajská Streda [SK]. From there they made a trip to Rajka [HU]. At Rajka they inspected by the Hungarian railway authority, completed trial runs at vmax between Hegyeshalom and Budapest and did a break distance test.

Metrans wants to deploy its EuroRunners between Praha-Uhřiněves and Dunajská Streda, beginning in June 2011. Secondly, it is possible that the 761s will also run to the terminals at Lípa nad Dřevnicí (nearby Zlín, CZ) and Budapest. Operations in Slovenia (Koper) and Austria are under consideration. On 04.05.2011, 761 002 made a test run to Lipa.

BTW: The third locomotive, 761 003, still awaits approval for the Czech Republic. Then it will go to Hungary too. - JP/JS/Zelpage

In 2014, the Südostbayernbahn (SOB) will get eight 4-engine Traxx DE locomotives for passenger services. Edit: It is not clear if this is the second order for this type of locomotive, or a selection from the twenty units ordered by DB Regio on 18.04.2011.


At the Transport&Logistics fair, Bombardier spread leaflets with the main technical parameters of the future 4-engine locomotives. It will get four Caterpillar C18 engines with a 2256 kW in total. On the question, if the new units will get the new front-design as presented with the AC3-version, Bombardier answered that the DB favors the current Traxx design, which is more similar to what they already have (Baureihe 185).

Almost missed it, but on 11.05.2011, the two EuroRunners for Cargo Trans Vagon (CTV) from Romania started their journey to their new home country: some nice impressions.. The serbice numbers of these units are 2016 750 and 751.
Related sections:
ER 20: CTV
2011-05-01 - [FR] Europorte orders twelve EURO 4000 locomotives from Vossloh España [update]
As a result of its international trade strategy Vossloh Espańa has closed a deal with the operator Europorte which will result in an order for twelve EURO 4000 locomotives that will be used to transport goods by freight. The order has been placed with Eurosco, a subsidiary of Europorte responsible for the management of rolling stock.

Europorte, which is the rail freight subsidiary of Groupe Eurotunnel, will receive delivery in May of the first two EURO 4000, designed and assembled in the Vossloh Espańa plant in Albuixech (Valencia). The ten remaining locomotives will be delivered during the second half of 2012. Thanks to this investment Europorte will be able to rationalise its fleet, improve its productivity and reliability, and reduce its maintenance costs.

update: Railcolor comment: Two of six EURO 4000 locomotives for normal gauge, originally built for Alpha Trains, are still not delivered. We know these as 4005 and 4006 (see images). The 4005 is known for its stay at the HGK during the past months. The 4006 was photographed yesterday near the French/Spanish border.

The other ten have to be planned from scratch, so that takes until 2012.

It was already hanging in the air this weekend, but now its official: A framework order for up to 200 4-engine Traxx DE locomotives with the Deutsche Bahn


Bombardier Transportation is taking the Traxx DE to a next level. With the German railways (Deutsche Bahn) a nine-year framework agreement is closed for the delivery of up to 200 locomotives.


Big news is the propulsion-concept of the new generation of diesel locomotives for the DB: it's four smaller 'rugged, heavy-duty industrial diesel engines' with 540 kW each. They offer a more efficient, fuel-saving, environmental friendly alternative to the singe-engine solution. The sub-contractor for the engines is not mentioned, but think of an engine-type that is also used for freight trucks. They are mass-produced...


The picture included in the press-statement shows us a familiar looking locomotive, as the body design is still identical to that of the current Traxx DE products. But looking at the roof construction and the under-frame installations, it is different. The two separate hatches on its side are the best clue for its inside innovations.


For sure, this design can and mos likely will change for future orders. It's a framework agreement for nine (!) years, so there is still a lot possible, passenger service, freight service, and a lot will change in the near future, who knows what kind of locomotive is needed in 2020?


Bombardier now can work towards the first fixed order; 20 units with a top speed of 160 kph for the passenger services of DB Regio. An order worth €62m euro, and delivery will start mid-2013. As always, assembly will take place in Kassel, the bodies come from Wroclaw in Poland and the bogies are to be built in Siegen, Germany.

There it is, the fourth EuroRunner for RTS from Austria, finally filling the gap in between the 2016 907 and 909! The new machine however is not painted in the RTS colours orange and silver (yet), although there was plenty of time to do so..

The designated 2016 908 arrived at the Swietelsky workshop-facilities near Fischamend yesterday. Coming from Munich, it hauled a short train, together with 2143.077, of conveyor belt- and ballast-carriages. Possibly it will get its RTS livery in the Autumn of 2011, but that information is not yet confirmed. - MO/GR/HP

update: At Fischamend, the locomotive is decorated with some provisorial RTS and Swietelsky-logos: picture. This website also states that the 908 will replace a RTS-EuroRunner that is currently being used by the GKB.

This weekend, we got several messages about locomotives changing colour. Must be the spring! The big picture shows the new livery of IntEgro 223 144. This unit was delivered in August 2010, but up till now it was anonimously white. And then there is Captrain. The 146 519 has no Nordbank-vinyls anymore. 186 237 turned green. And then there are 189 840 and 841, two Siemens stock locomotives, of which is said that they soon will change livery. - OW/KAR/BW
Related sections:
ER 20: IntEgro
2011-03-21 - [HR/SA] TZV Gredelj completes four GT26CW locomotives for Irolli

Rail Transport Service GmbH from Austria will soon expand its fleet. From Linz, Siemens will deliver a third ES64U4-locomotive to the operator: 1216 903.

Same for the number of diesel-electric EuroRunners, with the new 2016 908 their numbers will be raised from three to four. - Siemens

On 07.03.2011 several new EuroRunners from the stock production of Neustrelitz were present at Berlin, around the paint shops of Dangelmayr. Three of them just got a fresh livery, the blue and white one being the second unit for Metrans from the Czech Republic (761.002) and the other two units soon to be delivered to CTV from Romania. Metrans will get three units, 761.001 got its paint in the first week of February, the third one will follow soon. - SC
Related sections:
ER 20: METRANSER 20: CTV
2011-03-04 - [DE] HGK evaluates the Euro 4000 (the DE39 project)

Vossloh and the Israelian Railways (ISR) continue their close relation. 29 new Euro series locomotives have been ordered by ISR. The deal includes fourteen Euro 4000 units, and fifteen Euro3000 machines. First 4000s will be shipped in November 2011. Delivery of the 3000s Delivery will start in September 2012. For the 3000s there is option for more.


Vossloh/Alstom already delivered numerous diesel engines (the JT42BWs and JT42CWs) to the ISR since the ninetees.

metrans.eu exploits container terminals and offers all-in intermodal services in Europe. During the Innotrans 2010 fair they made public that they had ordered three EuroRunners from Siemens.

First EuroRunner for CTV will be handed over to the operator in April 2011. - Siemens

Related sections:
ER 20: CTV
2011-01-16 - [RO] Cargo Trans Vagon orders two EuroRunners
The website railwayinsider.eu brings us the news that Cargo Trans Vagon (we all know this operator for its blue and yellow 189 700 and 701 locomotives right?) has signed a contract with Siemens in december 2010 for the delivery of two EuroRunner locomotives. Except that they will be used for freight service, no further information is provided. - CV
Related sections:
ER 20: CTV