Originally based in Ulm, DB Regio 245 036-9 is now operated on the Marschbahn between Hamburg and Westerland (Sylt). Picture by Nahne Johannsen.


The Netz West concession was taken over from Nord-Ostsee-Bahn (NOB) by DB Regio in December 2016. However, not everything has been going as planned for the German operator. At the start of operations, DB Regio was faced with reduced availability of its married-pair push-pull coach sets due to issues with the couplings, forcing the wagons to be taken out of service for repairs. To be able to continue operations, a variety of coaches was sourced, including 48 from DB Regio, DB Fernverkehr and BahnTouristikExpress.


After a year of repairs to the 90 married-pair coaches, of which the first started to re-enter service in April 2017, the end of a long period of reduced wagon availability is now in sight. The repairs have been finished and gradually the push-pull sets are entering service with 68 out of 90 wagons (12 sets) now in normal operation. But not all is back to normal for DB Regio, as it is now faced with a lack of locomotives. Until the summer of 2018, the operator's fleet of fifteen Class 245.2 TRAXX DE Multi Engine locomotives will again be going through a repair programme one by one. After entering service in 2015, the locos started to show overheating issues, sometimes resulting in fire damage. One by one, the locomotive were called back to the factory to resolve the issues. Now, the locomotives are plagued by issues once again, reportedly by a mix of oil leakage, clogged soot filters caused by software issues and coolant leakages, causing engine shutdowns.


Meanwhile, the first five of fifteen locomotives have been treated and a sixth locomotive is to become available again in the coming week. Nonetheless, DB Regio is faced with four BR 245.2s not being available due to problems or planned maintenance. As the Marschbahn schedule requires twelve trains to be available (the remaining three sets are used as an operational reserve), this forces the operator to hire in additional locomotives. Currently, three additional locomotives are operated on the Marschbahn, including Sylt-based 245 026-0 (DB Fernverkehr), Ulm-based 245 036-9 (DB Regio) and Vossloh-owned DE 2700-09. For now, the replacement coaches will also remain in service, offering increased capacity and flexibility, as well as an increased operational reserve. 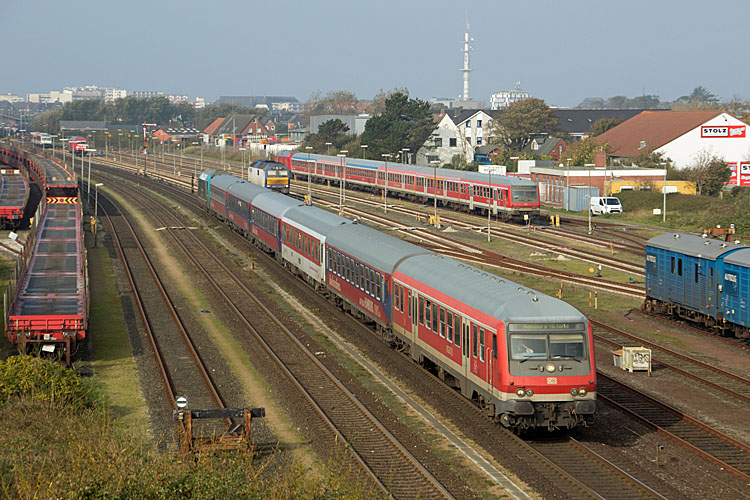