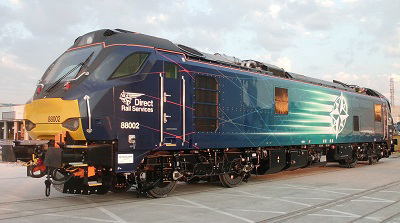 Direct Rail Services has released an image showing the livery of the brand new 88002. The colour scheme of the Class 88s will be largely the same as that applied to the operator's Class 68 locomotives, but additionally sports red and blue grid of lines (MLD: reminding us of overhead power lines).


DRS states on its website: "Testing of 88001 in Velim has concluded, reporting on the testing Stadler said: During UKDual test campaign in Velim, two main goals have been covered. First, we have focused to perform all test related to homologation purposes by using the capabilities of Velim test center (TSI track, catenary characteristics, braking distances.). As second goal, we have tested and adjusted locomotive performances as traction control in different conditions, diesel engine and electrical power management, by hauling a train of 1500Tons and an ER20 locomotive.


As our first dual locomotive, new functionalities of control software have been validated as dynamic mode changing between electrical operation to diesel operation (and viceversa) and fine tuning of automatic speed control.


Finally, Velim test site has been used as first scenario to show to DRS the behavior of the locomotive and let to our customer to feedback us with the first impressions about UKDual locomotive."

DRS also commented about the InnoTrans trade fair in Berlin in September where Stadler and DRS will present a Class 88 locomotive. We now know that the locomotive in question will be 88003.